Warrior2410 Posts: 154
April 2019 in General Discussion
Happy anniversary commanders! The update has resparked some life within the community and hopefully, that means new content.
Speaking of, you likely noticed this blue seeker in your collection that has yet to be added. 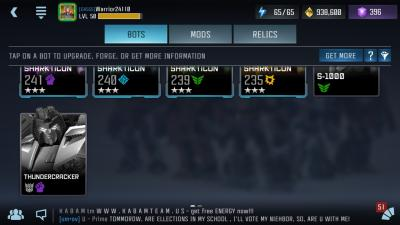 Apparently, Thundercracker is confirmed.
We all likely have a few questions, such as when he'll be dropping, and what his abilities are.

I think a few of us are also wondering why he's a brawler. This also befuddles me. To quote his wiki bio,
"Thundercracker claims the skies as his arena. He looks down in contempt on those who cannot leave the ground — he considers them lesser beings. He will often attack the flightless beings below him for no other reason than to satisfy his scorn.

His superiority in this realm is the only thing he is sure of. Thundercracker is not entirely committed to the Decepticon cause, and even has some seemingly contradictory sympathy for the humans they terrorize. Fear of retribution from Megatron and the influence of his peers is usually enough to bury these doubts. Regardless, he needs constant reassurance from Skywarp and Starscream (which occasionally take the form of threats) that he's where he needs to be. Sometimes, his heart's just not in the job."
As to how it aligns with his bio, I have no idea.
Devs, can we get some help?
Tagged:
0