Warrior2410 Posts: 154
June 2019 edited June 2019 in General Discussion
So I was talking with a buddy of mine on a discord server and we came up with a character thing for Swindle, the con-artist and opportunist of the Transformers. 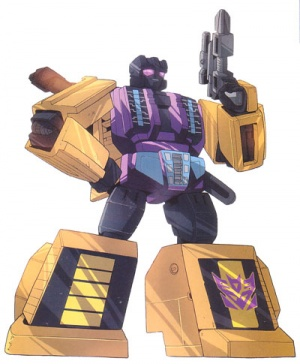 Bio: Swindle is a self-imposed entrepreneur first, and a Decepticon later. A member of the Combaticons, he supplies them with high tech weaponry for a reduced fee of course. Getting off New Quintessa is the least of his worries. Priority number one is profit!

Signature Ability: Shock Block: By scamming his fellow bots, Swindle was able to upgrade his shield.
-when swindle is struck by a melee attack while blocking he has a 30% chance to inflict shock dealing 45% attack over 4 seconds. 50% of that damage is recovered as health.

Specials:
Special One: Scam
--Swindle pulls out a rifle and fires off three shots, the final shot dealing more damage.
-100% chance to inflict shock dealing 30 - 40% damage over 5 seconds, shock drains opponent power at a rate of 5% per second

Special Two: Business
--Swindle fires a single shot from a pistol, before firing off the laser from his arm cannon.
- 100% chance to inflict heal block
- 50% chance to repair 9% of damage taken

Special Three: Profit
--Swindle pulls out a pistol, shoots once and then the pistol blows up. He then pulls out a rifle, fires multiple times before it blows up. He throws down the rifle before activating his arm cannon and firing a powerful laser. When the laser finishes, he picks up the broken blasters to sell as "slightly used".
- 100% chance to inflict shock dealing 80% damage over 7 seconds draining opponent power at a rate of 5% per second
- 75% chance to repair 10% of missing health

Brain drain/gain:
-The obvious for Swindle
-Shockwave randomly gains a Power Rate buff when filling a power bar (this replaces the Undo ability at random).

Let me know what y'all think about Swindle!
Tagged:
7