Prepare for the Class Clash!

A Clash of Classes is coming! Join us for a Special Week-long event where you can participate in special Arenas and Raids every day to earn class-specific rewards, including 4-Star Class Bot crystals and T4 Class Spark Essence!

Each day, one class will be featured in its own special 24 hour arena. You can only enter that Arena with Bots of the same Class or Bots that have a Class Advantage. For example, on Tech Arena Day, you will be able to use both your Tech and Scout Bots to compete.

Take on the Class Clash Special Team everyday to earn Extra Points and Class ORE-13! You can also purchase Counter-Class Sparks and ORE-13 in the Store with Class Clash Chips, and Class Premium Bot Crystals for Energon!

Note: There are Daily Purchase limits on all of these items, and the items in the Store are for the Class that Counter the Class of the Day.

For the duration of the Event, you can earn Class Clash Chips for every successful Raid you complete. Use these Chips in the Store to purchase Class Spark Essence and ORE-13!

There will also be a 7-Day Raid Ascent event running alongside the Class Clash Event. This event features the regular rewards for Raid Ascent, but also includes a small amount of Class Clash Chips in the rewards!

We understand that during Raid Events, the amount of Quintesson Bases you run up against might increase quite a bit, but we’ve made some changes!

During this event, Raid Chips awarded for Quintesson bases will be increased significantly, and they will now award Medals as well! They still won’t match what you get from Raiding another Commander’s base, but will be more comparable.

Which Bots are in the Crystals?

We’ve updated the Class Crystals to include all of our regularly available Bots! This means that the only ones not available are Thundercracker, and Bumblebee (Generations), while Bumblebee (DOTM) will be available as a 2 and 3 Star, but not as a 4-Star.

On July 3, a free-for-all Arena will be available featuring all the class special teams. The top rewards for this event will be 6x 4-Star Class Bot Crystals (1x OF EACH CLASS)!

This is also your last chance to spend Class Clash Chips on a variety of Class Spark Crystals! This is the only day that the Class Sparks are NOT Class Specific and will be in Crystals!

Get ready Commanders! The Class Clash event is kicking off on June 27th!

Rank up materials are in the Store for Raid Currency (Class Clash Chips) while the Class Shards for Bot Crystals are Arenas. 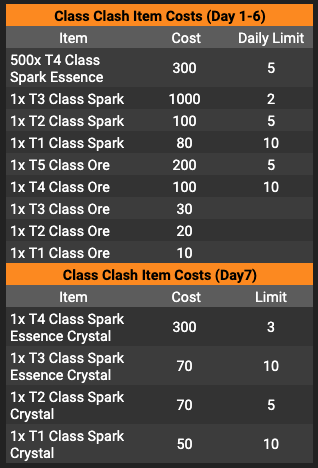 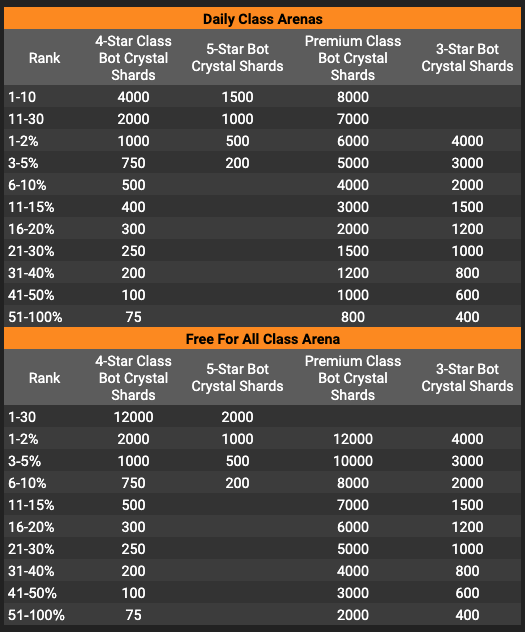